Just one more post to say that there’s exciting things happening over on my new site! A whole new design (which is pretty sleek, if I may say so myself), a few new posts, and more to come!

Be sure to subscribe over on the new site to continue receiving notifications about new posts! There’s a widget in the sidebar where you can plug in your email address- just like you did here once upon a time- and after confirming via a confirmation email, you’ll be good to go.

So head on over and check it out!

My blog has moved!

This site will remain active and viewable, but no new content will be going up here from this point on. I’ve moved to a new domain on a new platform, and I’m so excited to finally be launching the new site: Candidly Jo.

There’s a good chance that I will add site redirect soon, which will aid in all traffic flow to this blog being redirected to the new one. In the meantime though, just check out my new site and latest post here. And don’t forget to subscribe there (to continue receiving email notifications about new content) if you’ve enjoyed being a subscriber here!

Thanks for all of the support on this site, and I hope you’ll stick with me as I continue writing at the new one.

We started our journey at noon on Sunday, June 8th, with a shuttle taking us from campus to the airport. Two flights, a six hour layover, and approximately twenty-four hours later, we landed in Baku— the capitol of Azerbaijan and where we spent the majority of our two weeks— around 9pm June 9th.

We connected with our host and his wife outside of security and passport control and got our first glimpse of the city of Baku in all of it’s nighttime glory as we were driven to our hotel. It’s not called the City of Lights without reason.

But allow me to backup and explain  for a minute since I never really announced or talked about the trip at all on here.

We’re very excited to start talking about this trip and documenting the preparation process and eventually the trip itself! In May, we’ll be boarding a plane to Germany, and from there an aircraft which will take me and my peers to Azerbaijan. We spent the first month and a half or so of the fall semester working on planning our “vision trip” as a group. Our task was to think about and prayerfully consider what we would like to study on this trip, not where we would like to go. The point of this experience is not a vacation, but a time to grow as leaders and to learn about another culture, another people.

As a group, we met at least weekly outside of class, sometimes more, to work on planning our trip and putting together a presentation which we ultimately gave to the directors of the program and president of the college. We all threw out ideas on things we’d like to learn more about, and boy was that quite the list. When we looked at the repeated ideas though, we found ourselves with three popular thoughts: human trafficking, Islam/Muslims, and refugees. Rather than bicker, we voted to narrow things down. Most of us fell somewhere along a continuum of wanting to learn more about Islam and wanting to learn more about refugees.

After we presented our vision trip, our director of global education looked into location options for us, thinking we might end up in western Europe despite that not being a favored location because of how tourist-packed it is. The opportunity in Azerbaijan presented itself though, and as she looked into it more, it started looking more and more viable.

It’s hard to believe that was over six months ago.

In the weeks to come, I hope to finally be writing and sharing about my very first trip abroad. The trip was an opportunity presented as part of the scholarship program I’m in at school. Every year, the freshman in the program take a trip abroad, and this year found us in Azerbaijan.

I’ve been attempting to write this first post for weeks and weeks since being back, but between full-time work and a lack of words, it just hasn’t happened. Everything is still turning over and over in my mind, my brain still attempting to process all that we did and saw. So here’s to attempting to get something down on paper.

The morning after we arrived, we got our first taste of a traditional Azeri breakfast: fresh bread with cheese and butter, hard-boiled eggs, and hot tea. Our first day consisted of introductions, itinerary reviewing, and a walking tour of the city.

On day one, I learned to just accept that as an American in a country that doesn’t see a whole lot of tourists, I was going to stick out. We had spent a lot of time in our preparations learning about cultural awareness and being culturally sensitive, so I had this idea in my mind that if we just tried hard enough, we’d be able to blend in. That was not even close to the case though. A group of fifteen would stick out even on American soil, and we certainly did on Azeri ground.

Day one taught me that while cultural sensitivity is important, it’s okay to not always blend in. I had to accept my unchangeable and undeniable Americanism, and I had to stop apologizing for it. I had to learn to not be ashamed of my origins and to not feel like I had to apologize for being different and from a place of abundance and privilege.

There’s a line between pride in our roots and humility and sensitivity towards other cultures and other people’s roots. I guess that what I’m trying to say is that I had to learn how to appreciate another culture and another people, while not apologizing for my own being different.

By the end of the trip, I had embraced the tourist that I was, camera and all. 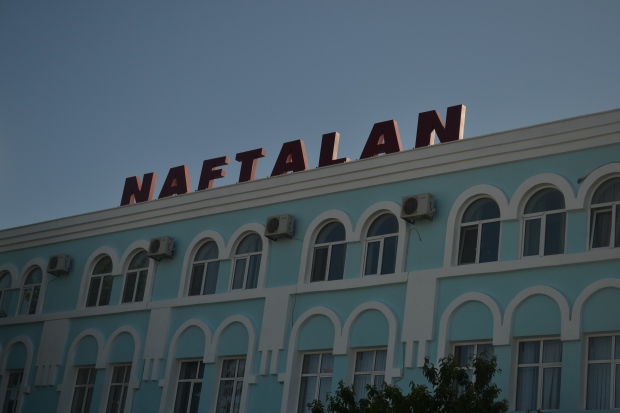 Home for our first two nights in Baku 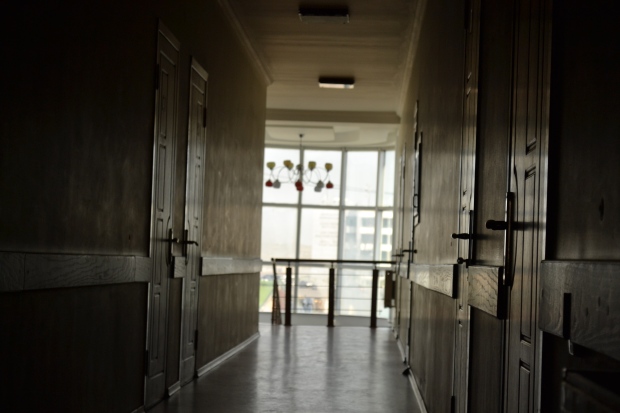 Can we make this the norm in the states please? #yum 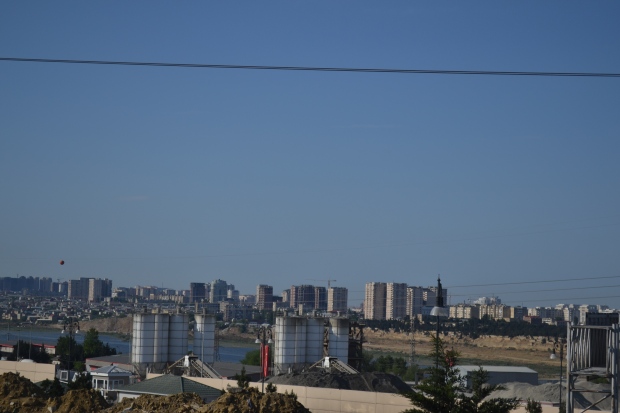 First glimpse of Baku in the daylight

Lunch on day one: dumpling soup with fresh herbs

Looking back on the city

Four students and our wonderful tour guide (he’s the one on the right with the cane). This man was with us day in and day out for most of our trip and became a dear friend to us all by the end of our trip.

The crew at dinner on night one. 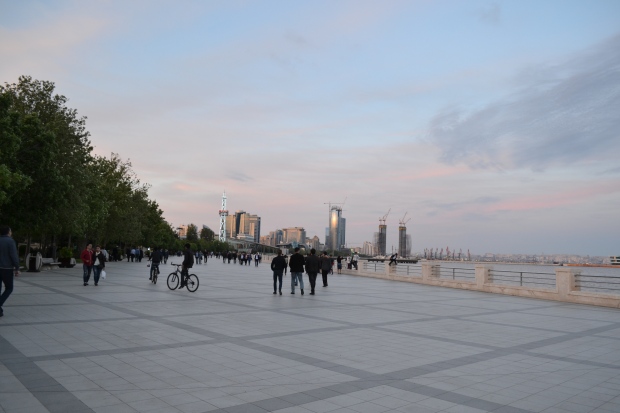 Walk along the Caspian Sea after dinner

Told ya I got camera comfortable by the end. This was our last day, and naturally one of the few pictures I didn’t take myself was a picture of me reviewing photos on the camera

In two weeks time, I’ll be on a plane with nine of my fellow students and friends on our way abroad. (Definitely will be talking more about this incredible trip once I’m back stateside.) BUT, for now, I’m knee-deep in that final push to the end of another semester. I can’t believe I only have three more days of classes and five finals before I am DONE with my freshman year of college. Wow. How time flies. As much as it feels like so much has happened and so much has changed, I also feel like I just moved in yesterday. So since I’m not ready to move out and to be a sophomore, here’s some photos from the year. (These start back where I left off last fall and go all the way up to now.)

Cheesin’ with one of the future roommates

Every residence building has its own unique event. For ours, we have a building theme within which each hall decorates and acts out a story line. This year, the building theme was Pixar and my hall did UP!

Sadly, I had class the night of the event, so I had to settle with helping decorate and taking a photo by one of our decorated walls.

It snowed at the beginning of the spring semester, and my Texan heart was very happy

Mystery dates! (Every hall on campus usually does mystery dates at some point. The RA plans a theme/task, roommates pick each other’s dates, and it usually is a competition between “couples.”) 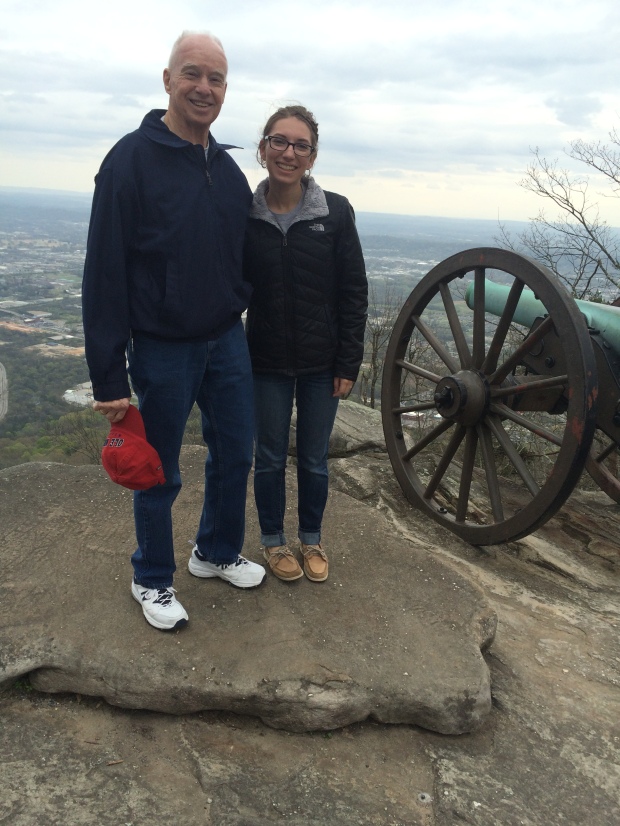 Grandparents came to visit me all the way from Texas! 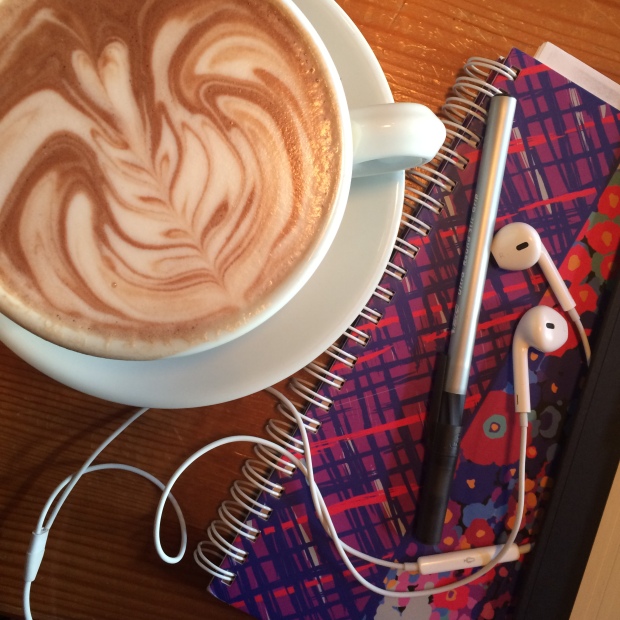 The prettiest hot chocolate I ever did see.

Shout out to Elizabeth Joy for the fantastic photos of me frolicking in the snow.

Two weeks ago or so, my hall had dinner at the Dean’s house. It just so happened that the weekend we were there, his wife’s parents were in town visiting, which was super cool because it meant we got to chat with them and get to know them as well.

I was at the table with the Dean’s wife and her mother, and the wisdom they imparted on us was so wonderful. We got to hear the story of how they met their husbands, what advice they had for us on waiting for the right guy, and their thoughts on being content in singleness at a college that is very, very marriage-crazed. Ring by spring, anyone? Yeah, that saying isn’t even a joke here.

In our talking, the Dean’s wife’s mother said something that really impacted me:

God will arrange the circumstances, you don’t have to.

In my current season of life, I’ve been doing a lot of searching. I’m searching for what I really want/am called to do with my life, searching for what types of things I want to define myself by, who I want to be as a person aside from my parents and family, etc. A lot of stuff that is pretty typical of college students, I think.

It’s so easy to get overwhelmed by all the choices and possibilities that are open to me in college, but it’s true— God will arrange the circumstances. I don’t have to worry about figuring things out. A great example is the way God mastered my living situation for next year. My current roommate and I are not sticking together, and for a while, I was very uncertain of how things were going to work out and who I was going to live with.

Eventually, things fell into place perfectly for me, and I’m super pumped to be moving into a four-man room with some of the best friends I’ve made since being here at college. To move in with them has meant that I’m not only leaving my current hall, but that I’m leaving my current building. At first, I wasn’t sure if this was a change I wanted to make, but as time has gone on, God has just shown me so many reasons why this change is the right thing for me. I’m so excited.

And that’s just His hand in one small part of my life. How much more is His hand in the bigger areas of not only my life, but everyone’s else too? Wow. It’s awesome how much the Lord cares for us and is watching over our lives. We need only obey while He does all the hard work arranging our circumstances.